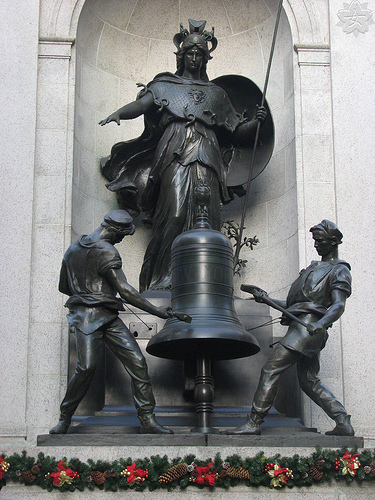 Located in the heart of Midtown Manhattan, Athena watches over Herald Square at 34th Street along with her bell ringers Stuff and Guff (occassionally Gog and Magog).  Athena is most known as the goddess of wisdom and righteous warfare.  As such, she is depicted here in near full armor, wielding her usual spear, shield and helmet.  She is also wearing a breastplate with a snake fringe and emblazened with a gorgon's head.  Other iconographical attributes to be noticted are the olive tree to Athena's bottom left and the numerous owls that are perched all over Herald Square.

Many of Athena's iconographical attributes are explained by elements found in the myths about her.  Her close affiliation with wisdom is evident from her birth story.  Zeus is said to consume Metis, a Titan goddess of wisdom, and then gives birth to Athena through his head, the seat of wisdom.  One version of her birth story is told by Hesiod in the Theogony, 886-929.