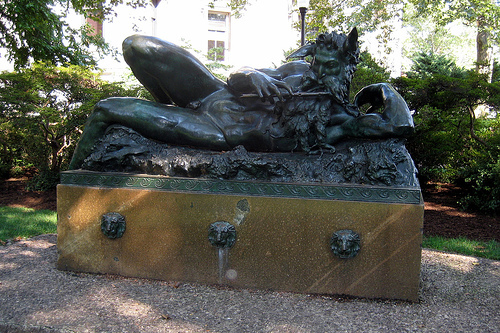 Pan is a personfication of wildnerness and nature.  He most commonly has the uppder body of a man and the legs, ears, and horns of a goat.  He is also assocated with shepherds and flocks, as well as nymphs due to his unbridled lustful energy.  One of his most iconographical attributes is the panpipes, a set of reeds bound together.  In the Homeric Hymns XIX, 1-47, Hermes is attested as Pan's father.  Ovid, in the Metamorphoses, 688-711, offers one version of the origin of the panpipes.  He tells us that Pan chased a youth named Syrinx, who was turned into reeds to avoid Pan's advances.  Pan, coming upon the reeds, fashioned them into pipes.