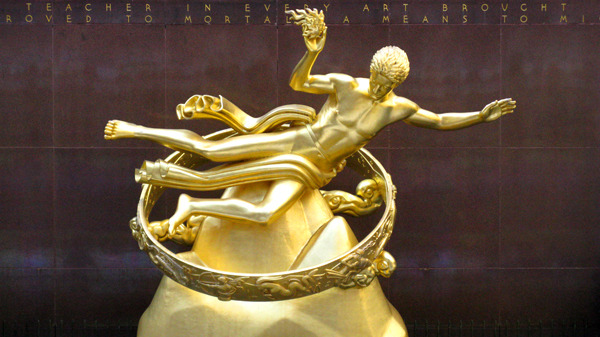 Promotheus is the son of Iapetus and Clymene, and is brother to Epimetheus and Atlas.  He appears in many stories regarding the earliest times of mankind, being most known for his role in procuring fire for mankind.  One version of this early story appears in Hesiod's Works and Days, 42-105.  As a result, Promotheus is often shown with fire in his hand.

Zeus was none to happy with Prometheus' theft of fire and punished him by chaining him to a distant mountaintop and having eagles eat out his liver everyday, knowing it would grow back and repeat the vicious cycle everyday.  There are several versions of this story, one of the earliest is found in Hesiod's Theogony, 507-616.  A second, later version, is told by Aeschylus in Prometheus Bound.  The myth of Prometheus' punishment has captured the imagination of many subsequent artists and results in many paintings featuring Prometheus chained and occassionaly the eagle eating out his liver.