From at least the time the picture hung at Althorp House, the canvas was extended considerably at the top and somewhat less at the bottom so that it would be closer in scale to Guido Reni's "Liberality and Modesty" [see Ref. Garlick 1976, pl. 28] in the same collection; both works were acquired from Henry Furnese's estate. At some point Apollo's drapery was enlarged to cover his genitals and overpaint in this area was removed before the painting was purchased by the MMA; the extensions to the canvas were removed during cleaning, following its purchase by the Museum.

The author of this painting was the leading classical painter in Rome in the second quarter of the seventeenth century; he was a friend of Poussin, whose style the present work recalls. Pasqualini, the leading male soprano of his day, joined the choir of the Sistine Chapel in 1630, and from 1632 was a protagonist of many operas produced at the Palazzo Barberini. His right hand rests on the keys of an upright harpsichord, which is decorated with a figure of Daphne and a bound satyr. The figure of Apollo in the center is loosely based on the Apollo Belvedere. Behind him is a figure of Marsyas tied to a tree with his bagpipes beside him. It was widely accepted in antiquity that the sound of a cithara, which allowed vocal accompaniment, was superior to that of the pipe, and in the present picture the wreath of laurels over Pasqualini's head celebrates his vocal skills and the new vocal style in opera. The painting (which was painted in 1641) is therefore both a portrait and an allegory of music. 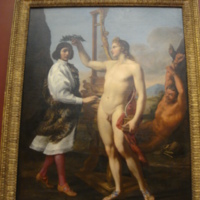