The Marriage of Cupid and Psyche

The Marriage of Cupid and Psyche

The painting represents the marriage of Cupid, the God of Love, with Psyche, in the presence of Juno, Jupiter, Mars, Venus, and other gods of Olympus, as narrated by Apuleius in "The Golden Ass". It seems to have formed the central panel of a ceiling with scenes from the legend of Psyche, painted by Schiavone in about 1550 for the Castello di Salvatore di Collato.

Schiavone's sketching style and balletic figures—much influenced by the work of Parmigianino—were highly innovative and important to a younger generation of painters, such as Tintoretto.

The four corners are later additions to the original octagon.
--
The subject is taken from "The Golden Ass" (books iv–vi), by Apuleius. The gods depicted surrounding the bridal pair can be identified as (left to right): Juno, Jupiter, Mars, Venus, Hebe, an unidentified river god, and possibly Vesta.

Originally octagonal in shape, the corners were added in the eighteenth century. The work was probably originally part of a ceiling decoration painted by Schiavone in about 1550 for the conti di Collalto, Castello di San Salvatore, Susegana. One of the ceilings depicted the story of Psyche, with the center compartment showing the marriage of Cupid and Psyche [see Ref. Ridolfi 1648].

There is an earlier variant of the MMA painting in the Istituto Nazionale di Studi sul Rinascimento, Palazzo Strozzi, Florence (Richardson 1980, no. 256; 130 x 130 cm).

A large drawing (MMA 63.93, "Psyche Presented to the Gods") by Schiavone depicts a related subject but with a different composition. 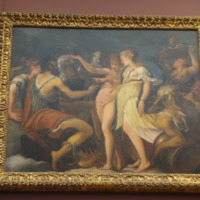