Mars and Venus United by Love

Mars and Venus United by Love

The work has sometimes been confused with a painting of Venus and Mars mentioned by Borghini ("Il riposo," 1584, p. 563) as commissioned by an unspecified emperor, and by Carlo Ridolfi ("Le maraviglie dell'arte," 1648, vol. 1, p. 320) as one of three works commissioned from Veronese by Emperor Rudolph II.

Jacob Jordaens made a drawing after this picture in 1654 in Antwerp, when Queen Christina's collection was en route from Sweden to Rome (J. Q. van Regteren Altena, Amsterdam).

This painting was engraved by Michel Aubert in reverse [see Ref. Mariette 1742] and by Jacques Couché [see Ref. Couché 1786].

Cupid binds Mars (the god of war) to Venus with a love knot. The picture operates on a number of allegorical levels and celebrates the civilizing and nurturing effects of love (milk flows from Venus's breast and Mars's horse is restrained). By 1621 it was owned by Emperor Rudolf II, in Prague, along with three other mythological works by the artist (two of these are in the Frick Collection, New York), but its original owner is unknown. These are among Veronese's greatest works, done when at the height of his powers.

Veronese was among the greatest masters of light and color, and his work had an enduring impact on later artists, from Annibale Carracci and Velázquez to Tiepolo. 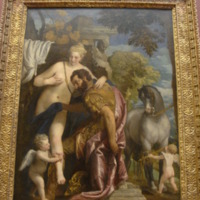