Venus and the Lute Player

Venus and the Lute Player

Titian and his workshop treated the theme of Venus and a musician at various times during the latter part of his career. He may have worked on this version sporadically over an extended period leaving it unfinished at the time of his death. The landscape is characteristic of Titian's work of around 1560. Following his death, certain parts such as Venus's face and hands were brought to a much higher degree of finish.

Much has been written about the meaning of Titian's paintings of Venus. In addition to celebrating love and music (Venus pauses from making music to be crowned by Cupid), they have been thought to address the Neo-Platonic debate of seeing versus hearing as the primary means for perceiving beauty. 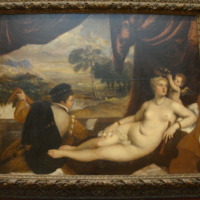