One of the greatest engravers of all time, Dutch Mannerist artist Hendrick Goltzius was also a superb draftsman, skilled painter and successful print publisher. He was born in 1558 to a family of artists living in the Rhineland near the Dutch border. Despite permanently injuring his right hand in a fireplace accident as an infant, Goltzius showed great artistic talent and in 1574 or 1575 became the student of the Dutch artist Dirck Volckertsz. Coornhert (1522-1590), in the Rhineland town of Xanten. Goltzius learned engraving and etching from Coornhert, making his earliest prints after his teacher's designs and those of other artists. Coornhert returned to his former home of Haarlem, in Holland, in early 1577, followed by Goltzius later that year. For the next several years Goltzius designed and engraved prints for Coornhert and for two Antwerp publishers, Aux Quatre Vents and Philip Galle (1537-1612). The subjects included religious and allegorical scenes and portraits. In 1579 he married the widow Margretha Jansdr (1549/1550-1631), who brought with her a modest inheritance and a son, Jacob Matham (1571-1631). Goltzius apparently began publishing prints himself in 1580 and by 1582 was prosperous enough to buy a house and two years later hired two apprentices. Sometime around 1584 Goltzius met the artist (and his future biographer) Karel van Mander I (1548-1606), a refugee from Flanders. Van Mander had worked in Italy and Vienna and was familiar with international art sources and trends. He introduced Goltzius to the drawings of the Flemish artist Bartholomeus Spranger (1546-1611), then working in Prague for the Holy Roman Emperor Rudolph II (1552-1612), whose work influenced Goltzius for the remainder of the decade. He published several prints based on Springer's Mannerist drawings. Soon Goltzius was cutting engravings based on drawings prepared for him by Springer, such as the large print The Wedding of Cupid and Psyche (N. Holl. D. 341), which caused a stir at the Frankfurt Book Fair in September 1587. By the second half of the 1580s, the Goltzius workshop employed assistants as well as apprentices, including his stepson Matham, Jacques de Gheyn II (1565-1629) and Jan Saenredam (1565-1607), and issued dozens of prints a year to designs by Goltzius, some engraved by him as well. He also began to create woodcuts; Hercules Killing Cacus from 1588 (N. Holl. D. 304), done in the chiaroscuro style, is thought to be the first of eighteen woodcuts he created based on his own designs. During the late 1580s Goltzius apparently suffered from depression and consumption, but despite his illnesses he traveled to Italy in 1590 via Hamburg and Munich, then to Venice, Bologna and Florence, arriving in Rome in January 1591, where he stayed for eight months (except for a sojourn to Naples). He studied art of all periods, from classical statuary to Renaissance masters. He brought back to Haarlem a collection of his drawings that would inform his art for the rest of his life, such as his three engravings after classical statues, e.g., the Farnese Hercules (1592, N.Holl. D. 378). During the 1590s Goltzius engraved many of his most famous prints, such as the six plates of The Life of the Virgin series (1593-1594, N. Holl. D. 8-13), one done convincingly in the style of Albrecht Dürer (1471-1528), another in the style of Lucas van Leyden (ca. 1494-1533), and four in the styles of other artists. Van Mander records that Goltzius completed the set very quickly to get it ready for sale at the Spring 1594 Frankfurt Book Fair. By the end of the 16th century he had created about 310 prints after his own designs and another seventy after the designs of others. Goltzius also created a large number of drawings intended as works of art in their own right, in addition to drawings serving as designs for prints or as studies. Done with in ink, chalk or metalpoint, on parchment, paper or canvas, his finished drawings were acquired by significant collectors throughout Europe, with at least three by the Holy Roman Emperor. Altogether some 500 of his drawings survive. In 1600 Goltzius undertook a major change in his artistic career. While continuing to draw, he stopped creating engravings and took up oil painting. He turned the publishing house over to his stepson Matham. While some scholars find his paintings to be less successful than his prints and drawings, his oils were highly sought after during his lifetime. About fifty surviving canvasses are now attributed to Goltzius. By 1616 his health had worsened and he died on January 1 of the following year. (TNB 6/2012) 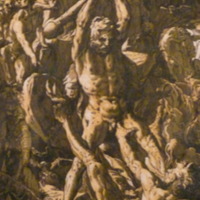