In the Salon of 1848, Diaz exhibited a painting entitled "The Departure of Diana for the Hunt," which was criticized for inept drawing. The following year, he painted this picture, larger than the first and characterized by careful draughtsmanship and a greater sense of movement. Its classical subject and high-key palette reflect the artist's interest in the works of Correggio (1489–1534) and Prud'hon (1758–1823).
--
Miquel and Miquel [Ref. 2006] catalogue five other versions of this composition, calling one (no. 2842; location unknown) a study for ours. They also identify our painting as the one shown in the Salon of 1848 as "Départ de Diane pour la chasse." However Sterling and Salinger [Ref. 1966] consider ours to be a replica of the Salon painting. 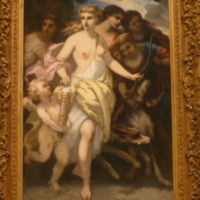